Q & A on FAMISHED: THE FARM 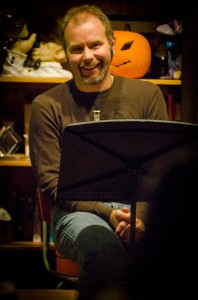 At the book signing, I answered a few questions I’d fielded from others in the past …

How long did FAMISHED: THE FARM take to write?

Since it started as a web serial, I spent three years on the very first draft – but that was only around 2000 words a month. I took my time for most of those sprints, though deadlines caught up to me more than once.

When Jennifer Brozek at Apocalypse Ink Productions asked me to turn the three years of Vorare into a novel, I took another six months to gather that material, weed through it, and collate it into a rough draft. After that it went to my alpha readers for a month, and for a month after that I was in editing / rewriting mode.

Apocalypse Ink took it in hand then, for a first read which resulted in another month’s edits* , followed by a second read for technical mistakes and a final proof by the editor herself. So all told, realistically – call it four years, with three years slow going and a quick one years’ of edits.

* – (my time, not theirs. AIP has always had a very swift turnaround to requests.)

You seem nice. Normal. Where did you get this idea?

As I’ve mentioned over at BookLife Now, horror isn’t always my genre. The request for Vorare was for a dark piece, though; and that set me to thinking about what frightened me the most. What had I seen, or read, that really disturbed me?

I was in grade school when my father took me into his library, pointed to a row of yellowing paperbacks that were placed within easy reach, and warned me: “These books here? They’re pretty scary. Stay away from them until you’re older.” Then he walked out and didn’t look back.

I had a flashlight and a book in bed with me that night, and I read The Picture in the House **. The full text is available at HP Lovecraft.com for those who are interested, but dad was right – it was nightmare fuel. The slow, easy start made it easy for me to get lured in, and by the time the old man reveals his cravings, I was shaking in the sheets.

That story kicked off the core idea for FAMISHED: THE FARM, and my other fears took it from there.

** – I’m not claiming I understood all the words Lovecraft enjoys at that age, mind. Precocious, yes; freak genius, no.

Have you lost any friends over this book?

Not that they’ve told me! I do have some thoughts on those people who support the work vs. those who relish it, but that’s a post for another day.

Got questions of your own? Email me at ivan@ivanewert.com and we’ll talk them over.

This entry was posted by Ivan on November 20, 2012 at 9:00 am, and is filed under Famished, Writing, Writing Advice. Follow any responses to this post through RSS 2.0. Both comments and pings are currently closed.