« Holiday Season
If You Want to Write »

I’m writing from the fading memory of a dream, and I want to get it down as quickly as I can.

Last night I took L and my mother to the Chicago Shakespeare Theater to see a new production of A Midsummer Night’s Dream, a World’s Stage production from India and Sri Lanka. It’s running here through December 7, and by God I wish everyone in the world could see it. 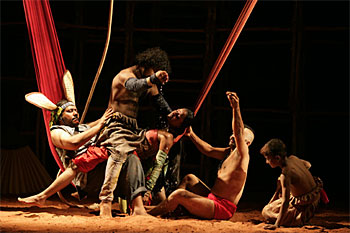 The play is performed in eight different languages – English, Tamil, Hindi, Sinhalese, Malayam, Bengali, Sanskrit and Marathi. No simultaneous translation into English. I was worried most about that, since I love Shakespeare’s language so, but then, there are plenty of times that I just allow the English to wash over me in his plays, to roll like a river over uncomprehending stones that nevertheless become a part of the music. That was what the different languages became, glorious, wonderful, incomprehensible music.

Because part of the glory of live theater is that you don’t need the language. You have the actors before you, clad in lemon and violet and turquoise robes and dusty loincloths and ridiculous shirtsleeves and linen trousers and prince-nez and you follow it, you understand: These two are in love, these two love hopelessly, these strange creatures reverse and enchant love, charms and magic abound until all is set aright again. It’s like watching Kurosawa late in the night, when sleep is overtaking you and the subtitles stop making sense, but still you know that in the end the message will come through to you. 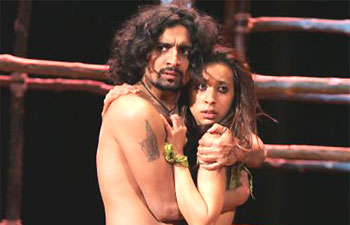 And God, the physical beauty of it! I’m accustomed to watching acrobats perform but not to seeing a young boy, no more than ten, go into a full lotus yoga position supported only by the crook between his big toes from a crimson curtain dangling fifteen feet above a sand-covered stage. I’m accustomed to watching actors roll about on stage, but not to the sheer physical abundance and heat of a full-on wrestling embrace. The dances were phenomenal to watch, the energy moving in waves of heat and light and life through the audience and toward the back rows where we sat, enchanted in the best of all possible ways.

The performers crawl along a bamboo frame set in the back of the stage, climbing and clinging and tearing through the thin curtains of Theseus’ court, transforming the palace into the wood as our actors are translated into asses, faeries and wounded lovers. By the end, banners of royal purple unfurl over the naked bamboo to take us once more into civilization.

For me, this was the weakest part of the performance – but I also think it can be the weakest part of the play. Watching the townsfolk’s performance of Pyramus and Thisbe is always a laugh riot but the snide asides of the civilized court cheapen and demean them in my eyes, taking them away from being noble and vital lovers and into a threadbare audience – Shakespeare’s intent, perhaps, but not one I personally find moving or attractive.

Still, by the end, the actors playing Bottom and Flute have, in a way, translated their performances once again. They do not play the death scene for laughs, but earnestly and with goodwill, and despite myself I was caught up again and subdued by the tragedy of it all. They were astounding in that moment, pure and whole in the performance of their lives. Before the epilogue – delivered in English, in its entirety – the troupe performs a song-and-dance, reprised post-epilogue to the swaying claps of the entirely Anglo-Saxon audience.

Suffice to say that we walked out into the soft purple night full of smiles and wonder, into the unusual warmth of a lakeshore evening in latest November, ready to come home, to sleep, and ourselves to dream.

(Images are from Megan Mooney’s excellent theatre blog and the Guardian UK review.)

This entry was posted by Ivan on November 30, 2008 at 6:01 pm, and is filed under Performance. Follow any responses to this post through RSS 2.0. Both comments and pings are currently closed.